The store will not work correctly in the case when cookies are disabled.

Picture yourself about a month after your LSAT test day. You’re refreshing your email for the 50th time that day, anxiously awaiting your LSAT score, and when you finally get it - you received a low lsat score - those three digits don’t add up to the score you hoped for. Or perhaps they did, but you know you can do better. You start wondering if you should take the LSAT again.

Retaking the LSAT is not a decision to make lightly. For one, it means going back to the drawing board and prepping for the LSAT exam again. On the other hand, your new LSAT score could bump up your law school application if you score higher. 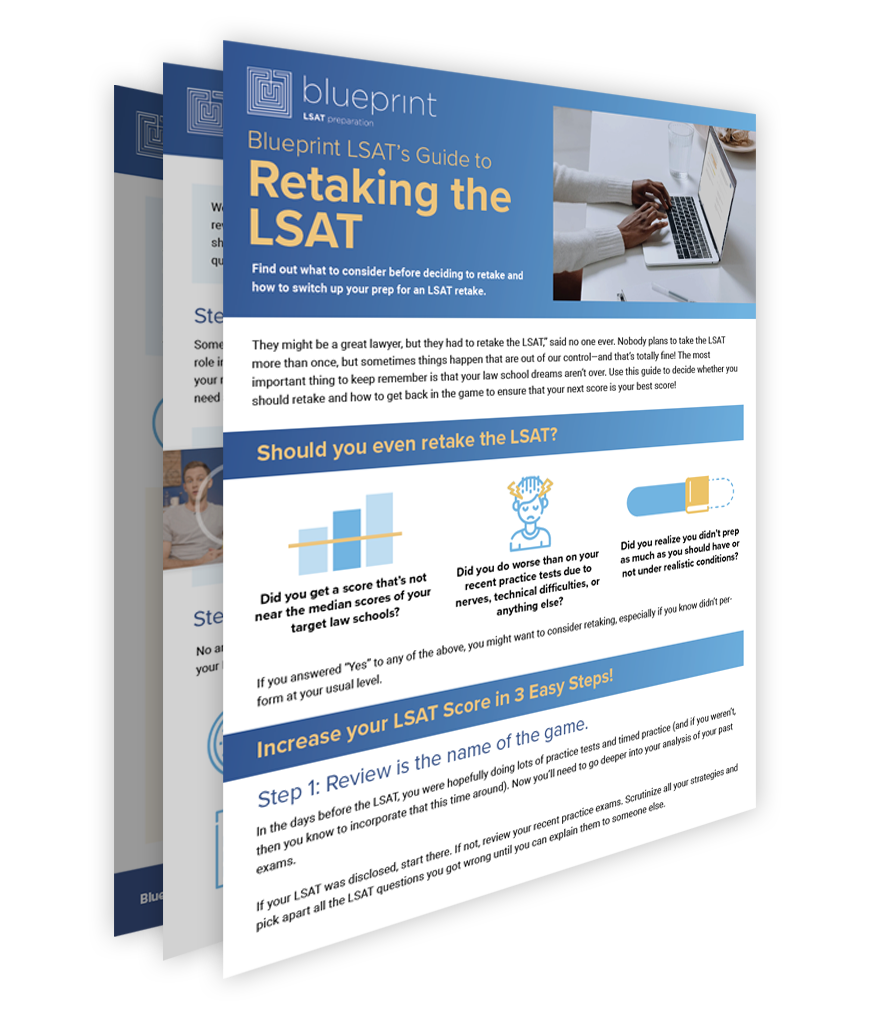 Download our Guide to Retaking the LSAT to find out how to make your next LSAT retake the last one!

Get your free Guide to Retaking the LSAT now!

FAQs About Retaking the LSAT

Many of our students come to us seeking help after they've decided to retake the LSAT and experience life-changing score increases!

"I took the LSAT twice last cycle without Blueprint...and made a 155 and 159...I received my score yesterday for my third and final retake and made a 166! This has drastically improved my admissions chances and scholarship chances, and I am so grateful to Blueprint."

"This was my third time taking the LSAT and I had a 12-point increase on my score! I actually was hesitant to take the LSAT and was planning to reschedule it but Chris gave me the confidence that I could do it and I did better than I could have expected. Thank you Blueprint and Mr. Whyte!"

"I had 10+ point increase from my old LSAT and I never would've been able to do it without Blueprint!"

"The Blueprint course I took was extremely helpful with gaining the tools I needed to do well on the LSAT. I took the LSAT for the first time a couple months before signing up for the course and took the LSAT again after my course and was able to jump by 8 points. I would highly recommend Blueprint!"

Ready to get a higher score when you retake the LSAT?
Start by downloading your free Guide to Retaking the LSAT now!

Download the Blueprint LSAT Guide to Retaking the LSAT!