LSAT Scores
How is the LSAT Scored?

The Law School Admissions Test (better known as the LSAT) is a four-hour exam composed of roughly 100 questions. LSAT scores are often the determining factor between getting accepted or waitlisted to a law school, receiving a scholarship or applying for a loan for said school, and even your starting salary after law school! What we’re trying to say is, LSAT scores—while not a representation of your natural intelligence or self-worth—are a pretty big deal.

The LSAT scores range from 120-180, with 120 being the lowest possible score. If you are wondering what a good LSAT Score is, there is no failing or passing score on the LSAT. But your score is more than simply the number of questions you got right or wrong—it’s slightly more complicated than that.

Every LSAT student gets three “scores” that help paint the picture of their performance:

The raw score is the number of correct responses across the four scored sections, added together.

LSAT decides which raw score is going to correspond to which scaled score (on a scale of 120-180) based on a variety of factors, like the total number of questions on the test and the overall difficulty of the questions. This is similar to converting a number grade into a letter grade, except in the case of the LSAT it’s translating from one number (your raw score) into a more meaningful number (your scaled score). The scaled score is usually the score you will talk about when asked how you did on the LSAT.

The following is a score conversion chart from the November 2018 LSAT, to give you an example of how LSAC converts your raw score to a scaled score. Other LSATs have slightly different score conversations. So on other exams, you may have to answer more questions, or fewer questions, correctly to earn a given scaled score. 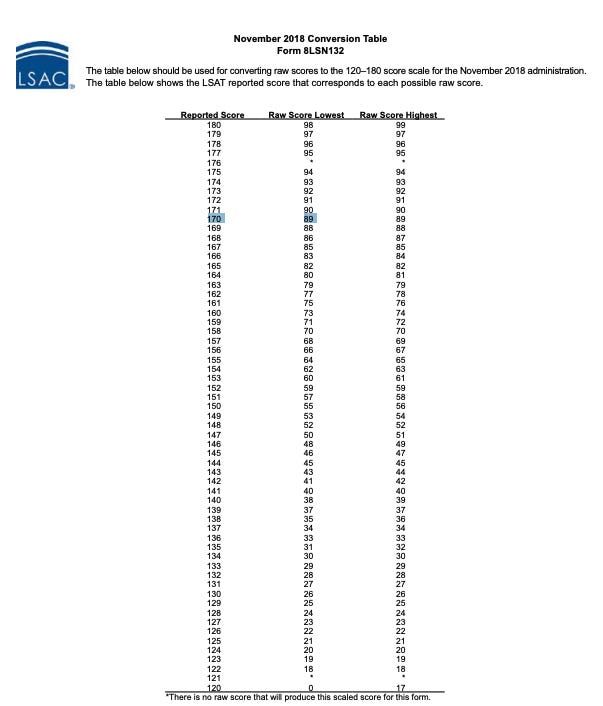 Your LSAT percentile score is the percent of test takers who scored lower than you on that particular exam. For example, if you scored in the 99th percentile (173), that means 99% of other test takers scored at or below that level. The LSAT percentiles chart isn’t just for the single administration that you take, but rather is an average over several years.

What is the LSAT curve?

By now you've probably guessed that there's a lot that goes into your LSAT scores. Why is it so complicated? The LSAT is graded on a “curve” so that even if a test was relatively easy or difficult, a 160 on any given test is equivalent to a 160 on any other test. This means that not all tests are exactly the same level of difficulty.

So, if you're reading about LSAT chatter and someone says, "Oh, that was a really hard test. The curve will probably be -12," you'll know they're referring to the number of questions you could get wrong and still get a 170, placing you in the 97th percentile of test takers.

When are LSAT scores released?

LSAT scores are released usually about three weeks after your test date. If the LSAT was disclosed, you’ll also receive a copy of the test questions along with your score report.Check out our updated list of LSAT test dates and score release dates.

Things happen during tests. It’s entirely possible you might end up with an LSAT score you don’t like. Fortunately you can definitely cancel your LSAT score. Unfortunately, you are not allowed to see your test score before you cancel. In fact, the deadline to cancel is usually just six days after your LSAT test date. If you do go that route, however, your would-be score won’t be released to schools but your score report will show that you canceled your score. The downside is that you might end up scrapping a potentially amazing score. You can always retake the LSAT, whether or not you choose to cancel. Law schools don’t view multiple negative LSAT scores as a negative. Retaking the LSAT requires planning and a revised study schedule. You don’t want to make the same mistakes again, so it’s necessary to know what areas need improvement. Blueprint students have the advantage of using our powerful analytics to pinpoint their weak and strong areas. Additionally, you might need to need to switch up your prep. If you originally self-prepped, look into taking an LSAT class. If you took a class, working with a private LSAT tutor can help you identify new strategies to overcome any obstacles on test day. But if you simply need more practice, many students enjoy the Blueprint Online Anytime Course’s pay-as-you-go plan, especially if they’re not sure when to retake the LSAT.

What LSAT score do I need to get?

There are no minimum LSAT scores for law school applicants. A quick search will yield law schools’ median LSAT scores of their incoming classes, but they are by no means an ironclad requirement for acceptance. A great GPA, strong letters of recommendation, a compelling personal statement, or other aspects of your application can help you get accepted, even if your LSAT score is slightly lower than the median score for the incoming class. And it's important to remember that these median LSAT scores reflect these applicants' highest LSAT score, since law schools almost never average LSAT scores when applicants have multiple scores on their score report. Average LSAT scores are more relative than absolute, especially given that nearly all law schools will take your highest LSAT score, rather than average your scores (if you’ve taken the LSAT more than once and have multiple scores). With all that said, here’s a score chart with median LSAT scores of students entering some of the top law schools in 2019:

When determining what LSAT score you should shoot for, base your decision on the average LSAT scores of the law schools you’re applying to. However, don’t forget the law school application review process is holistic and your GPA, resume, and references will all play significant roles. You can apply to law school with a high LSAT score and a low GPA and vice versa.

How can I raise my LSAT score?

There’s only one way to increase your LSAT score: LSAT prep. You’ll need to put in the work to see the results. It’s the reason why homework and drills are a huge part of the Blueprint curriculum, and it pays off—Blueprint students see an average 11-point score increase from their first practice test. Whether you choose our online LSAT prep course, a Live Online course, or a private LSAT tutor, you’ll benefit from in-depth analytics that not only give you a higher score, but also break down your test-taking habits that contributed to it.

Stay up to date with the latest